Your sense of time

First encounter with the work of artist Miriam Vlaming was some years ago as I lived in Copenhagen.

At that point I had only seen her work in the big matrix – that is the internet.  As the Berlin Gallery Weekend in May 2014 came around I went to Galerie Martin Mertens where an exhibition with Vlamings new work was shown.

The colors, the motifs, the layers had a different feeling to them. The visual expression changed – colors more intense yet light, strong and vivid. This revealed that a slight shift had taken place – a new artistic perspective that I was interested in knowing more about. Miriam Vlaming was so kind to invite me to her Atelier to have a talk about her new work and her relation to the temporal aspects of being an artist.

The expressional aspects of her newer artworks are primarily seen in the use of vivid, intense colors as well as how the characters are painted. They have gone from almost always being relatively anonymous – no facial expression, no mimic. The characters are no longer only characters but subjects with emotions, direction and time. The vivid colors are combined with the special technique that reminds me of stencil techniques from street art – where layers on layers are continuously expanding the paintings in front of you.
In these works lies a new expanded temporality. This new temporality I find interesting – what role does time play in your work?

„Time plays an important role in my work – the practical aspects and process of not only preparing and mixing pigments also applying and working with layers upon layers on the canvas is simply put a very timeconsuming process where I need a lot of time. In that sense I work with different levels of abstraction – in the end I seek to create a sense and feeling that time stands still.

Being able to fixate a point in time or to make time stand still can be seen as making a testimony – For any art, painting and photography I believe that this ability and desire “to make time stand still” is present and inherent to the artistic work. In a sense by working against a concept such as time that can be considered finite and what can be considered ephemeral – you make a testimony – a proof or evidence saying – I was here and even when I am no longer here a part of me will still be here. Representing a part of this human life and this reality.

On the one hand you then have this desire related to time that influence my work and the process. On the other hand the temporal aspect play an important role in the material from which I often draw my inspiration – Photographies – small frozen moments.

My interest for the topic time grew out of a personal experience. As I was in my midtwenties I decided really to move forward with painting – within a period of 2-3 years a lot of familymembers then quite suddenly died. During this period I was in my work very involved with studying “what used to be, what is right now and what will be”. By working with temporality I simultaneously worked through the personal loss and grief. In the end what evidence and proof remain and what is left other than Photographs and letters. During a lifetime the personal experience of losing a familymembers, loved ones, dealing with the grief is something that most of us goes through. “

The amount of time spent on creating and finishing a painting varies a lot – some paintings Vlaming spends 2-3 months on finishing – others happen overnight. Situations where the sense of time disappears or steps in the background in relation to what I at least experience if I

The reminiscence of streetart, stencils techniques as well as graffiti and sprays is very apparent to me. I seem to detect a strong affiliation with this style. The shared properties of Vlamings work and streetart is a temporal quality.

One of the main characteristics when using stencil technique are that it can be done in a matter of seconds. As the stencil artist you can beforehand prepare everything and execute the specific work extremely quickly. This characteristic is apparent for the viewer, the pedestrian when passing a streetcorner and seeing a stencil, a graffiti tag and so on. This trade is however in contrast with the temporal aspect of Vlamings works. Layers on layers of paint create depth in her paintings, despite of the very different methods the visual result and expression share similarities.

The timeconsuming and extensive process of mixing pigments, adding multiple layers of tempura stands in juxtaposition to the quickness of the take-away premade stencil and a can of graffiti spray. The temporal aspect of the two methods couldn’t be further from each other, one is done within the blink of an eye – the other often takes months. Although they do share similarities in the visual expression the beautifull and massive paintings of Vlaming holds a depth and richness that streetart due to its temporality will not have.

Somehow the visual expression in the paintings is not only motives and paint. In front of Vlamings work you sense the movement, emotion, inspiration, the process of mixing, preparing, layering, considering, waiting – you sense the time spent and you sense the point in time that the painting refers to. As if the motif and situation seen – brings the viewer to this particular part in time.

It portrays an atmosphere – that one single moment in time where some people had a picnic that Sunday near the lake or the feeling you felt when you played in the garden. You can sense a force of joy, aerial lightness and strong will in the paintings that are fantastically refreshing and vivid. 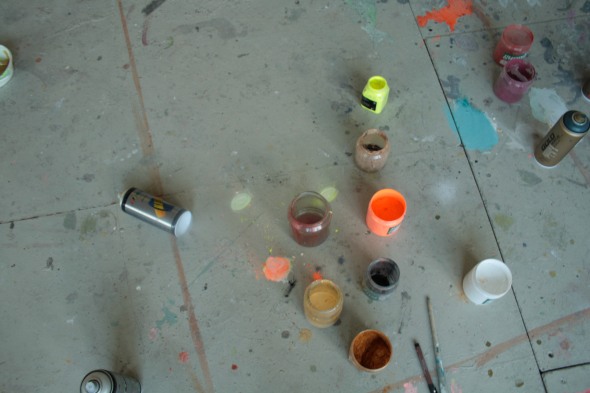 Arno Rink was a former professor of Miriam Vlaming as she was studying at the Academy in Leipzig. Miriam Vlaming points to Arno Rink as one of the major influences on her work.

He was acting as a sort of trigger and catalyst to her work.  Rather than talking directly about the painting itself he instead talked about life or emotions. This provided Vlaming with the setoff to proceed her work. Vlamings work was and is partly driven by reacting to the popular art movements of the 1990’ies and the properties inherent to photography.

Vlamings relationship to photography is close to what you could call a love-hate connection.  Although she turns to photography for inspiration it also to some extend annoys her. Photography is too regulated so to say – it holds too little flexibility in relation to the outcome and result. The degree of predictability when working with canvas, paint and sprays are much lower compared to photography.

Working with pigment, paint and canvas no reassurance is given in relation to how the process will move on or how the final painting will turn out. The artistic method used in relation to painting is much more dynamic and depends on several factors to be succesfull – such as skills, experience and strong point of view. Skills which Vlaming is in possession of.

A big thank you to Miriam Vlaming for taking the time and inviting me to her Atelier – In front of her artwork – My time stands still. 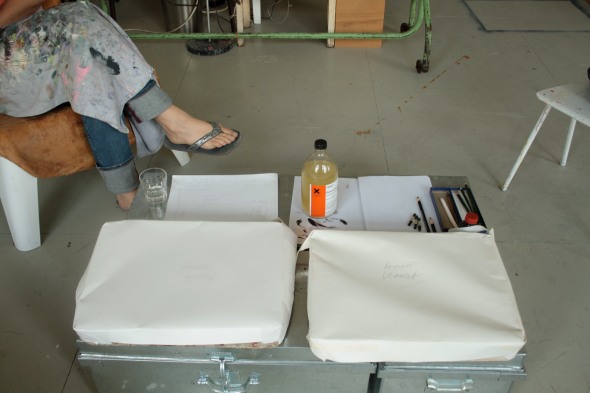 For the quick ones – the show runs until  the 16th of november – you can see some of her works at „Bielefeld Contemporary. Zeitgenössische Kunst aus Bielefelder Privatsammlungen“,

Miriam Vlaming + Lu Song + Per Adolfsen: The 3 artist work in Berlin, Peking and Kopenhagen. They will meet eachother in 3 rooms in Schillerstraße to “redecorate”.
Read more about it here

One thought on “Your sense of time”